Quilt Festival/Long Beach: Some Of My Favorite Memories 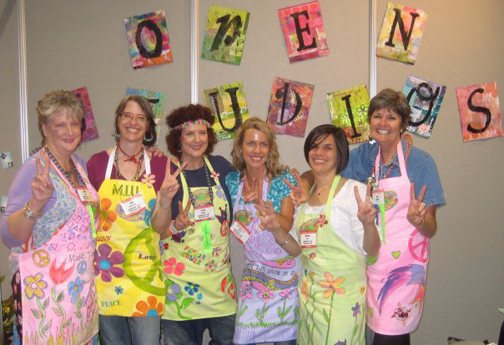 I’ve attended the Long Beach show since its inception in 2008, both as an exhibitor and a member of the Quilts Inc. staff, and I thought it would be fun to share some of my favorite memories from over the years. Warning: this is a people-centric (not quilt-centric) post!

• Editors on a Plane

This was an especially hilarious memory. After a long day of editing in the Quilting Arts/Interweave office, we scurried home, grabbed our luggage, and took a late night transcontinental flight from Logan to Long Beach…where the editing fun didn’t cease. As soon as we took off, out came the red pens!

Helen Gregory and Barbara Delaney opting to not watch the FREE Direct TV on Jet Blue but rather edit. Again.

Alisa Burke was one of our founding artists at Make It University!, and with her workshops, successfully convinced quilters that paper and paint can be just as fun and exhilarating as fabric and thread.

• Channeling My Inner “Chariots of Fire”

My morning solo runs in Long Beach, coupled with a music mix of Southern CA artists, made early mornings (typically dreaded at home) my favorite time of day.

Every year, I ran the length of the beach to the pier and back before the show opened, and although I chose a Doors playlist over Vangelis, that quiet time running on the beach made me feel like I could outrun anything or handle any (possible) quilt mishap.

• Getting By with the Help of My Friends

I’ve gotten to know this crew pretty well, and the beauty of these prolific art quilters(besides their talent) is they are not cliquish, but rather inclusive–of everyone, embodying the spirit of the greater quilting community. (And they are pretty darn fun, too, as anyone who witnessed “Surviving the Runway” can attest.)

I got to marvel at and hug other quilt friends, too, like Maggie Winfield, who always dressed to the 9’s for the show:

And I got to know other artists who have a rather beautiful spirit:

I also hung out with women who turned their love into a business (not to mention are hilarious):

“This Thing Of Ours” by Pokey Bolton. My sister-in-law, Sally Murray posing with me in The Silver Screen exhibit.

With the Silver Screen exhibit I finally had a reason to turn my obsession for “The Sopranos” into a quilt.

Upon reflection in reading my narrative for this quilt (below)–given the passing of James Gandolfini–I wont see my silver screen wish come true, but it will always be my favorite  TV series!

Fans of HBO’s “The Sopranos” know it isn’t just a TV show about wise guys. There’s a bit of Tony in all of us: impulsive and selfish; concerned friends will rat us out; living with the guilt of whacking others (so to speak); distrustful of those supposed to have our backs; and deep down, a little panicked that—in the end, and despite our best efforts—the ones we love most will fly away.

Not only were heavy issues and the ensuing plot lines handled masterfully by David Chase and his posse of writers and actors, but the show was also hands-down funny. It’s no wonder millions of people waited patiently during the long hiatus between seasons to find out what would happen to the Don and his crew next. I can only hope that the intensely disappointing, anticlimactic last minute of the series finale was conceived for one reason, and that is…the movie’s getting made! Here’s to “The Sopranos” making it to the silver screen.

• Witnessing A College Degree Put To Good Use

My niece Lindsey Murray, a recent proud Boston College graduate in this shot, blowing hot air into a plastic dolphin. I think she passed out a couple seconds after I shot this.

However it was the Long Beach show where my Lindsey bought her first quilt kit, and made her very first (of many) quilts:

Colleen from Redondo Beach rendered speechless when she realized she had the winning ticket for a new 550 model.

Helping to host the Iron Quilter challenge was a total hoot (for full, in-depth coverage with LOTS of photos, visit this page). However, the best moment for me was watching a very lucky attendee win a new BERNINA. She was so shocked and grateful…I teared up.

My kitty, Khaleesi disapproves of my dog-themed fabric.

What quilter doesn’t love to come home with gobs of fabric?

• Being With One of My Greatest Mentors

Yvonne Porcella has been one of my biggest cheerleaders and supporters. Perfect example: years ago at a BERNINA retreat before a TV taping, she saw how stressed I was with segment preparation, cleared off a pool table in the hotel bar (and made it clear no one in the bar could play), assisted me in setting up my sewing machine, and helped me finish everything, all the while being careful not to slash the green pool table felt with her rotary cutter. It was wonderful to catch up with her at the Dinner@8 supper at the Hyatt.

Working alongside some of the best people I know.

And with Lindsey Murray McLelland and Sally Murray of Interweave

With love to Long Beach! I know it’s not on the roster for next year, but you never know what will happen down the line. Until we meet again…

This site uses Akismet to reduce spam. Learn how your comment data is processed.